Do I Suffer from Hearing Loss? 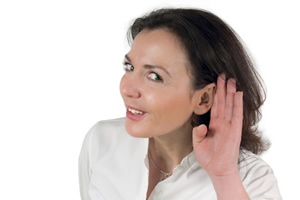 Hearing loss is a very common medical condition, affecting approximately 38 million Americans.  Although most common in older patients, hearing loss can occur at any age.  Approximately 14,9% of American children under the age of 18 have some degree of hearing loss.  Most cases of profound hearing loss and deafness are detected shortly after birth with newborn hearing screening performed in the hospital nursery.  Chronic ear infections are a common cause of hearing loss in children, and are sometimes treated with tympanostomy (PE) tubes.  Older children, adolescents, and teenagers can also develop hearing loss.  Noise exposure is a leading cause of hearing loss in these age groups, and is becoming more prevalent due to the increasing usage of personal listening devices (MP3 players with earbuds or headphones).

Age related hearing loss (presbycusis) is also extremely common.  According to the National Institutes of Health, an estimated one-third of people in the United States between the ages of 65 and 75, and close to one-half of those older than 75, have some degree of hearing loss.  Heredity and chronic exposure to loud noises are the main factors that contribute to hearing loss over time. Common sources of noise exposure include recreational firearms and occupational (work associated) noise.  Certain medications, especially chemotherapy and aspirin containing products, can damage the inner ear.  Other factors, such as earwax blockage, can prevent the ears from conducting sound as they should.  Hearing loss can have a large impact on a person’s quality of life, both physically and emotionally. Hearing loss has been linked to stress, depression, loneliness, reduced job performance, and reduced physical and mental health. Adults with hearing loss are less likely to take part in social activities and are more likely to feel depressed or sad.

Common signs and symptoms of hearing loss include:

On average, patients tend to wait five to seven years between first experiencing hearing loss symptoms and seeking treatment. Research shows there are good reasons to begin hearing loss treatment sooner rather than later.  Over time, reduced stimulation to the ears and brain impairs the brain’s ability to process sound and recognize speech. Once speech recognition deteriorates, it is only partially recoverable when hearing aids are in place.  Early amplification also improves patient comfort and compliance with hearing aid therapy.  Delaying therapy can prolong adaptation to previously unheard environmental sounds such as fans, airplanes, and footsteps.

TIINITUS (RINGING IN THE EARS)

Research reveals that 50 million Americans have at some point experienced tinnitus and that 16 million Americans report frequent tinnitus, occurring at least once a day. Tinnitus is the perception of sound with no external source. Most patients perceive tinnitus as ringing, buzzing, roaring, hissing, or tone-like. Many patients state that tinnitus has a negative impact on their lives (i.e. difficulty understanding speech, trouble sleeping, difficulty in social situations, and issues with depression and concentration). Tinnitus is usually associated with a hearing loss, but can also be caused by noise exposure, head trauma, certain medications, or diseases of the auditory system. Cerumen impaction, otitis media, temporomandibular joint dysfunction, and cardiovascular disease can also be associated with tinnitus. At this time, there are no Food and Drug Administration (FDA) approved medications for the treatment of tinnitus; however, hearing aids have been proven to reduce the severity and frequency of tinnitus, sometimes eliminating it completely. The Xino Tinnitus with Multiflex Tinnitus technology by Starkey is a device designed specifically for patients with tinnitus.

If hearing loss is suspected, an audiogram (hearing test) is performed.  During these thorough tests conducted by our audiologist, the patient wears earphones and hears sounds directed to one ear at a time. The audiologist presents a range of sounds of various tones and asks the patient to indicate when a sound is heard.  Each tone is repeated at faint levels to determine exact hearing thresholds. The audiologist will also present various words to determine hearing ability.

For your convenience, you can use the form below to send us an email requesting an appointment with ENT Associates of Northeast Louisiana or call (318)855-6282. Someone from our practice will get back to you promptly to confirm the date and time you requested or offer alternative dates and times that accommodate your schedule.

Filling out this form does not actually make an appointment.

It is only a request for an appointment. Within 1 business day you will receive a call from ENT Associates of Northeast Louisiana with an available appointment time.

If you do not receive a phone call within 1 business day, there my be technical difficulties with the online form, in that case please call our office at (318)855-6282

This service is for non-urgent appointments only. If you have a medical emergency, please call 911

© 2013 All Rights Reserverd By ENTNELA.com